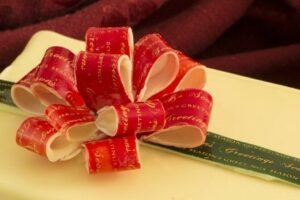 A Christmas Story from 2019

It’s 11:30 AM, and ‘Eddie,’ is in line at St. Vincent de Paul Middletown’s (SVDM) Soup Kitchen where he is every day at this time.  Accepting the meal, he says thanks, and brings his tray to a vacant table to eat in silence.  Sometimes he’ll allow one elderly woman to join him – a volunteer who reminds him of his mom.

Eddie lost his manufacturing job of 15 years about five years ago.  He lived with his parents back then, but when his mom passed away, his dad moved to Florida alone.  He and his dad don’t talk much.  Eddie has applied for many jobs but gets nervous during the interviews.  He isn’t old enough for social security, and despite suffering debilitating anxiety he isn’t eligible for disability.  He rents a single room which his dad pays for.  He takes odd jobs when he can find them, and eats every day with us.

“Sign up for a Christmas gift?” he asks me incredulously.  “A gift from whom?”  Eddie looks away from me, returning to his meal, shaking his head at the thought of Christmas.  “Who would waste money buying me a present?” he muttered.  I sign him up anyway.  On Friday after the mid-day meal was done, the staff at SVDM began handing out small gifts.  That was his cue, and Eddie stood to clear his plate and leave.

“There’s something there for you,” I said, pointing to the place where he sat.  On the table was a one-pound box of chocolates, wrapped and tied neatly with a bright red ribbon, a card bearing his name resting atop the package.  Eddie returned to his seat.

“I didn’t ask for this,” he said without looking up.

“I know.”  A long silence followed.

“I don’t deserve a present.  I haven’t done anything,” Eddie said.

“I guess that your friends in this community disagree,” I said.

There’s a line of scripture which reads, “…let us not love with words or speech but with actions and in truth.”  Christmas is about love and love includes caring for the less fortunate.  Eddie doesn’t believe in himself, and he wonders why you do.  He wonders why you bought him a gift this Christmas, why he was important enough to care about, and why you believe that his life does matter.

So, thank you.  The food you donate or help to buy throughout the year nourishes the body.  Toiletries help restore dignity lost.  But it is your unconditional kindness that will become Eddie’s strength.  We are truly blessed to have you in our community and thank you for your generosity this holiday season. If you were hoping that you have made a difference in someone’s life, you have.  Merry Christmas.

Your Community Partners at SVDM

Woman Receives Donations for SVDM as Her Birthday Gifts!
September 11, 2018